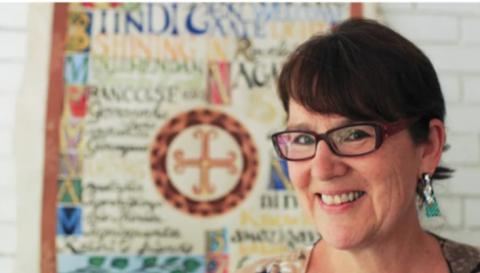 APRIL 7, 2022 -- Dr. Sherry Farrell-Racette was Albert Community School’s latest speaker in the “Growing Up Indigenous and Getting an Education” series. She had many stories to tell and all of them simultaneously focused on art and the creative process as well as obtaining an education.

Sherry started off her presentation by sharing her background. She was born in Manitoba and is of Métis heritage and is a member of Timiskaming First Nation in Québec. She told the students that her dad had a Grade 3 education, was in World War II, and became an electrician. Her mother was an educated person, but it was through her dad that she learned to “see everything as living.” The men in her family were nurturers and her dad helped foster Sherry’s love of art. It was her father who told her, “Don’t sell out.”

Sherry described what it was like to grow up in a town called Pipe Falls in Manitoba. It was difficult being Indigenous in the school. When Sherry was asked what it was like going to high school, her response was that it was a struggle and that she “survived” it. Sherry experienced continual racial bullying and found it to be a social challenge trying to navigate where she fit in. Sherry also explained that you must be “smart and know how to surround yourself with people who will support you.” This was a great piece of advice to give the Grade 8 students who will be transitioning to high school. During her time in high school, Sherry said her favourite part, of course, was art class and the art teacher. She also enjoyed history, social and English classes. Sherry also stated she struggled with math and still does to this day. Her advice to students was to not give up in math even if it is a struggle because it is a skill people truly need in life.

It is from here that Sherry explained to the students her varied career path. She has been to art school, has worked in social work, has written and illustrated books, has worked with different types of art media, has had her work shown in gallery locations around the world, has done extensive work in archives and museum collections, and has had a long career in Saskatchewan education, working at SUNTEP Regina (GDI), First Nations University of Canada, and the University of Regina. She served on the Regina Board of Education as a trustee in 1991-92, 1992-93 and 1993-94.

Sherry wrote and illustrated The Flower Beadwork People (2009) and illustrated three books written by two former Regina Public Schools’ employees, Anne Patton and Wilfred Burton. Those books are Fiddle Dancer (2007), Dancing in My Bones (2009) and Call of the Fiddle (2011).

Albert students then questioned Sherry about her gift. Sherry explains that all the things you are good at are your gifts from the Creator. The gifts can range from cooking, beading, sewing, basketball, writing—anything that is creative and positive in your life. Sherry asked the students to really evaluate what their gifts are. She also said, “You grow into your gifts and are encouraged to commit to them.”

Sherry encouraged Albert students to continue with their education. “Your talent is needed!” she stressed. “For example, museums need conservators with an interest in Indigenous historical items.”

Sherry then told the students, “Never mind those who will bother you; they do not want what’s best for you and they do not deserve room in your head.” She also stated, “Do not be afraid to make mistakes; you will learn more from them.” Lastly, she said it is important to have goals, and “have an idea of where you want to go and what you want to do. Keep your eyes on the prize!”

Sherry shared many stories that related to her artistic side and her education. Art and education walk side by side in Sherry’s life; there is not one without the other. One gift supports the other gift and vice versa. Her gifts from the Creator have helped Sherry create and grow as an artist and educator, and also to encourage others to recognize their own gifts and to grow into them as one walks this journey on Mother Earth.