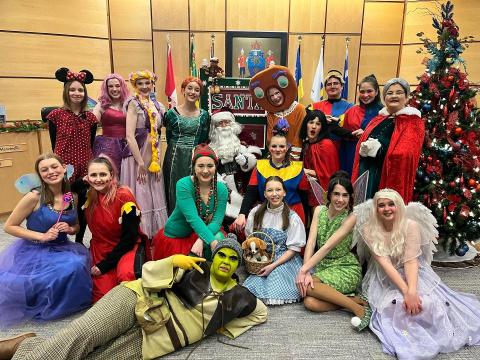 DECEMBER 20, 2022 -- On Tuesday, December 6th, a group of 18 Balfour Arts Collective (BAC) students were invited to volunteer at the Light the Lights event hosted by the City of Regina at City Hall. This yearly event is open to the public and is a gathering to celebrate the coming of the winter/holiday season. The event includes local performers, hot chocolate, tasty treats, outdoor activities and even a visit from Santa and Mrs. Claus. Best of all, Regina residents can watch as the City Hall trees get lit up in ceremony.

BAC students from Balfour’s recent production of Shrek the Musical dressed up in character to volunteer at the event. Shrek, Gingy, Farquaad, Pinocchio and several other fairytale creatures ushered families in the direction of Santa and Mrs. Claus while staying in character and taking photos with children as they waited in line. Students also performed a flash mob version of the musical number “I’m a Believer” for the crowd.

These students did a phenomenal job of representing Balfour and its values by taking time out of their day to give back to the community. They were excited and honoured to take part in the event, and their participation left smiles on everyone’s faces. Staff are so proud of everyone involved.