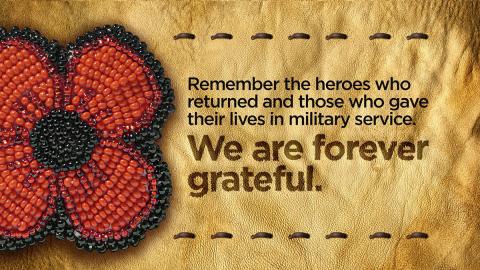 NOVEMBER 7, 2021 -- Indigenous Veterans Day is recognized annually on November 8th. Originally established in Manitoba in 1994, it is now a national day to recognize and acknowledge the many contributions and sacrifices made to Canada by First Nations, Métis and Inuit people in military service. November 8th is a time to better understand and respect the role Indigenous veterans have played in Canada during the First and Second World Wars, as well as the Korean War, and in post-war peacekeeping efforts to the present day.

Originally, First Nations, Inuit and Métis people were not eligible for conscription because they were not citizens of Canada but many volunteered despite the challenges, including travelling great distances to enlist, learning English and coping with cultural differences and racism.