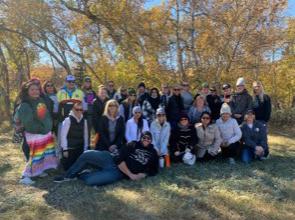 NOVEMBER 7, 2022 -- On October 7, 2022, Albert Community School had a professional development (PD) morning of land-based engagement. The morning included picking sage, rose hips and wolf willow. The staff meeting was held around an open fire while staff cooked bannock on a stick, hotdogs and s’mores.

Staff were given packages that contained enough tobacco to lay as an offering for the harvesting of medicine and artificial sinew to tie up the sage being picked. Staff were asked to lay a bit of tobacco down when picking each individual medicine. When picking sage, staff were asked to gently pull the seeds off the top of the sage plant and lightly throw them onto the ground so that more sage plants grow next season. Staff were then shown how to break off the sage close to the ground but not pull the plant out of the ground. That way, sage will grow from the root in the following season. Once the sage was picked, staff took the sinew and wrapped it up into a bundle and hung it up high to dry.

The rose hips can be found all over the fields staff walked. Again, staff were asked to lay a bit of tobacco down so they may pick enough rose hips to make a cup of tea. A handful of rose hips or a quarter of a cup is needed to make an individual cup of tea. Once the rosehips were picked and crushed, they were put in a coffee filter and boiling water was poured over top. The tea must steep for approximately 15 minutes before the filter can be pulled out and the tea enjoyed. Rose hips were gathered in the past and used for various medicinal reasons. Rosehips are known for their lycopene and beta carotene and are high in antioxidants and vitamin C.

The wolf willow is the next plant that was harvested and, in the fall, you harvest the silver berries. Inside the berry is a seed, which is edible but hard to chew. These berries are high in nutrients, especially omega fatty acids. The hard seeds can be boiled to soften and then use used as seed beads for beading necklaces. 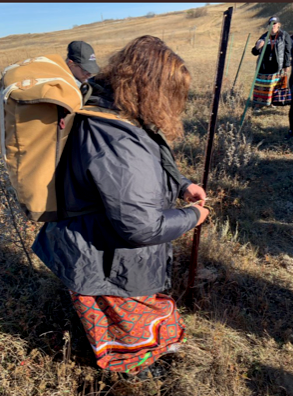 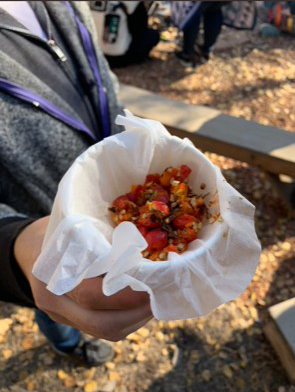 These are just three of the indigenous medical plants found in one field; imagine before the expansion of the West and the influx of settlers what other indigenous plants could have been found in the small area that was visited. This PD was important for staff to come together and learn about the medicinal knowledge of Indigenous people and to look at the landscape and realize that it was not the barren Great Plains as most settlers would have seen it. The land was not void of food and supplies needed to survive. In fact, if settlers adjusted their perception, even just a little, and took time to learn from Indigenous people, the settlers would have seen an abundance of food at their fingertips. Part of reconciliation is making space for Indigenous knowledge to be learned, not just viewed as an added-on component or a box checked off saying it’s been completed. Indigenous knowledge needs to be given legitimate space. The validation of this knowledge aids students with Indigenous ancestry in seeing the value of the education system, valuing their personal history and identifying themselves in the curriculum.

How do teachers make these small steps forward to reconciliation? By partaking in a PD that allows them to harvest medicines, share a meal, have a cup of tea, exchange stories and have a staff meeting in front of a fire. This is exactly what a community of Indigenous people would have done prior to European contact. They would have hunted and gathered food, shared a meal, exchanged stories, and then there would have been meetings to attend for various individuals to come together and make decisions for the good of the community.

Indigenous ancestors wanted the future generations to learn alongside the Europeans. They also wanted the future generations to remember the traditional hereditary Indigenous knowledge and be equals in the new economy that the Europeans were bringing. Let us all change our thinking and make space for each other as we move forward in the true spirit of the treaties and reconciliation.